To enhance our conservation efforts, Sea Turtles 911 and The Ritz-Carlton, Sanya also conducted a sea turtle conservation campaign on Weibo, titled “Sea Turtle’s Way Home,” to communicate the importance of the ocean eco-system, which includes its wildlife, through showcasing our conservation activities in the past years. We also shared information on the life of the sea turtle and the threats they face on the campaign webpage.

In the end, the Weibo campaign helped boost awareness of the sea turtle’s plight and our conservation efforts. Its online poll garnered more than ten thousands of wishes and also votes to name a sea turtle that was released. Her name was voted as “Yeqiu” in Chinese, or “Coconut Ball” in English – a playful moniker that suits his friendly personality!

This sunny Saturday, a large crowd, consisting of volunteers from Sea Turtles 911, Blue Ocean Association, and Hainan Normal University, as well as hotel guests, gathered for the sea turtles’ release ceremony. It also drew the Consul General of the US Consulate of Guangzhou and representatives of the National Aquatic Wildlife Conservation Association, Land Resources Bureau, Sanya Ocean & Fishery Bureau, and Sanya Tourism Board. to the hotel’s shores. In this joyful and hopeful moment at the Sea Turtle Shelter, all parties pledged to protect the precious sea turtles and their ocean home. 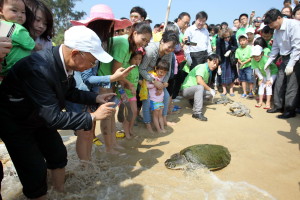 The Sea Turtle Shelter, located near Uncle Martin’s Secret Garden, was decorated with colorful ribbon. Inside, handicap and rehabilitated sea turtles were swimming happily. Mr. Frederick Yeh, Founder of Sea Turtles 911; Mr. Michel Goget, General Manager of The Ritz-Carlton, Sanya; and other guests each picked up a rehabilitated sea turtle and gently carried it toward the ocean. While the crowd watched, the turtles scrambled safely to the sea, ducked under the sparkling waters and vigorously swam away. The journey of the sea turtle has begun, and we sent them our best wishes for a safe and long life.

The Founder of Sea Turtles 911, Mr. Frederick Yeh has held a strong interest in caring for animals since his childhood. He moved to America with his parents and studied at John Hopkins University to be a medical doctor. After graduation, he decided to give up the high paying job opportunities in the U.S. after helplessly witnessing the sale of sea turtles in China.  Yeh said, “President Obama’s 2008 “Change We Can Believe In” campaign inspired me to return to China to make changes to the lives of endangered sea turtles, in order to protect our global ocean environment for future generations. America’s education instilled in me the responsibility to give back a better environment to my roots in China, and strengthen Sino-American relations for the conservation of sea turtles.  Sea turtles are migratory animals that serve as natural ambassadors of the ocean.  As countries work together to preserve this natural resource for future generations, our shared mission to save sea turtles nurtures a peaceful platform of common grounds to improve international relations.” 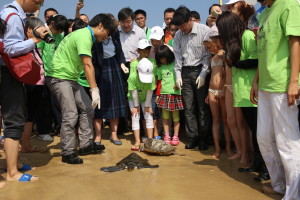 Mr. Michel Goget, General Manager of The Ritz Carlton, Sanya, shares the same vision with Mr. Frederick Yeh, in conserving our marine environment for future generations. He said, “Since 2009, we began to cooperate with Sea Turtles 911 to protect sea turtles through the recursions, foster cares, freeing animals and other activities. We made people aware of the importance of the protection of sea turtles through continuously educating our hotel guests and local fishermen. We spoke of rescuing sea turtles in the South China Sea in order to create more survival chances for the sea turtles in the Hainan region. At the end of last year, we finally built a shelter for sea turtles. The handicap turtles can freely enjoy 5-star care as educational ambassadors of the ocean, and rehabilitated turtles have a temporary place to stay for careful behavioral monitoring just before they begin their journey back home into the ocean. Together with Sea Turtles 911, we have also developed a sea turtle conservation lesson, which focuses on educating our little guests and local school students about the importance of sea life and social responsibility at their early age, while they help feed endangered sea turtles at the shelter. The Ritz-Carlton, Sanya will continuously support this meaningful event to enliven The Ritz-Carlton Community Footprints, which, in addition to environmental conservation, focuses on hunger, poverty relief and the well-being of children.” 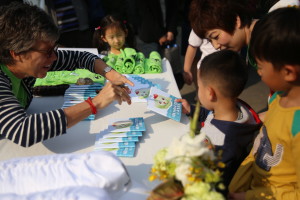 Sea Turtles 911 is a non-profit organization dedicated to the conservation of sea turtles in the South China Sea. Their efforts are focused in China on the Hainan Island coastal regions, home to the critically endangered Hawksbill sea turtle and the endangered Green sea turtle. Their endeavours in Hainan are complicated, and perhaps all the more so crucial, in light of the fact that the region’s people have a long standing practice of hunting sea turtles for their meat and gathering sea turtle eggs from beaches to be sold as dining delicacies. As plain as it may seem that such practices are wrong, reversing an ingrained tradition and threatening people’s livelihoods are matters which must be approached with certain tact. While taking firm action to save as many sea turtles as possible on a daily basis, they acknowledge that their efforts can only make a measurable and sustained difference if awareness and appreciation for sea turtles is spread among the local people, eventually converting would be poachers into protectors and allies of these magnificent, graceful, and gentle creatures.

About The Ritz-Carlton, Sanya

Situated on an exclusive site along Yalong Bay in Hainan Province, The Ritz-Carlton, Sanya provides expansive views of the South China Sea and features 450 guest rooms, suites and private villas. Extensive recreational facilities include swimming pools, tennis courts, fitness centre and a signature Ritz Kids® Club. Guests will also enjoy the largest Ritz-Carlton spa in the region designed by ESPA. Seven restaurants and lounges offer scenic views of the lagoon and the ocean.  In addition to flexible space designed for meetings, conferences and special social events, a waterfront wedding chapel, will be the backdrop for intimate ceremonies. A designer on-site boutique shopping arcade with six of the world’s top brands: Louis Vuitton, Prada, Salvatore Feragamo, TOD’S, Paul & Shark and Ermenegildo Zegna is a first for Hainan Island.

About The Ritz-Carlton Hotel Company, LLC

The Ritz-Carlton Hotel Company, L.L.C., of Chevy Chase, Md., currently operates 84 hotels in the Americas, Europe, Asia, the Middle East, Africa, and the Caribbean. More than 30 hotel and residential projects are under development around the globe. The Ritz-Carlton is the only service company to have twice earned the prestigious Malcolm Baldrige National Quality Award, an award that originated in 1987. Its purpose is to promote the awareness of quality excellence, recognize quality achievements of companies and publicize successful quality strategies. The Ritz-Carlton Hotel Company won the award in 1992 and 1999. For more information, or reservations, contact a travel professional, call toll free in the U.S. 1-800-241-3333, or visit the company web site at www.ritzcarlton.com. The Ritz-Carlton Hotel Company, L.L.C. is a wholly-owned subsidiary of Marriott International, Inc. (NASDAQ).