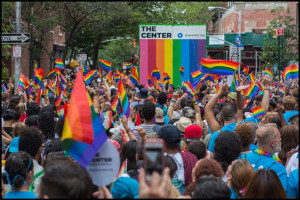 NYC & Company, Tourist Office in New York City, invites visitors from around the world to New York City to participate in the celebrations of NYC Pride in the five boroughs of the city. The complete list of events planned is already available on nycgo.com/gay. Event center will be the focal Manhattan, where Heritage of Pride will organize numerous parties and events with the theme “Equality Needs You” June 21 to 26, including Pride Rally, Fantasy, VIP Rooftop Party, Teaze, the March, Pridefest and Dance on the Pier.

“New York City welcomes with open arms LGBT visitors all year round, but the Pride is a very special time to be in the city,” says Fred Dixon, president and CEO of NYC & Company. “West Village, the birthplace of the modern movement for gay rights, Chelsea, Hell’s Kitchen, East Village, Williamsburg and Jackson Heights are just some of the neighborhoods where they take place the celebrations in June and July.” “They are expected to attract over 2.1m spectators in New York City in June and NYC Pride is thrilled to welcome them once again for the largest LGBT event in the world, “said Chris Frederick, Managing Director of NYC Pride.” the theme for 2016 is Equality Needs you, a reminder of the ongoing struggle for full equality and the effect that each individual can have in his world. “

More information on the events of Pride in Manhattan are available on nycpride.org. Among these are:

The Rally, June 24th at 19:00, is the event that gives the official start to the celebrations of the Pride of New York City. The first rally took place a month after the Stonewall Riots, in June 1969 and since then is held annually as a meeting and gathering to remember the origins of the Pride celebrations. Participation is free and open to the public.

Fantasy is the opening party of the Pride and takes place on June 24 from 22:00 in one of the newest clubs and successful New York City, The Diamond Horseshoe, under the Paramount Hotel in Times Square. of the evening themed “NEON”: Participants are invited to wear their gaudy clothes for the occasion.

VIP Rooftop Party, considered one of the most fashionable party of the Pride, takes place in the Hudson Terrace, an exclusive rooftop to admire the most extraordinary cities in the world. Appointment on June 25 from 14 to 22.

Teaze, June 25 from 15 to 22, is the event of NYC Pride exclusively dedicated to women, with renowned DJs such as Samantha Ronson and Toni K.

The March, the big parade of June 26, will start at 12 in Murray Hill, at the height of 36th Street on Fifth Avenue, to arrive at Christopher and Greenwich Streets in the West Village. Many non-profit organizations, companies, groups of activists and public figures participating in this event every year. Grand ceremonies edition in 2016 will be Jazz Jennings, the youngest in the history of NYC Pride, Subhi Nahas, co-founder of the first LGBT newspaper in Syria, and Cecilia Chung, defender of LGBT rights internationally recognized. The March is the largest Pride parade in the United States, for which they expect 2 million spectators.

PrideFest, just after The March on June 26, is a LGBT neighborhood fair, which takes place on Hudson Street between Abingdon Square and West 14th Street with vendors, entertainment and activities, for a day of celebration in the name of equality. The event is free and open to the public.

Dance on the Pier, June 26 from 14 to 22 at Pier 26, Hudson River Park, celebrating its 30th anniversary in 2016. Considered one of the most anticipated musical events of the year, large hosts DJs like Ben Baker, Honey Soundsystem, Hoxton Whores and Alain Jackinsky.

In addition to Manhattan, several events of Pride will be held in the districts of New York City, including Salsa con Fuego, on June 1 in the Bronx, the parade Brooklyn Pride March on June 11, on Fifth Avenue between 3rd and 9th Streets in Brooklyn and Queens Pride parade and Festival on June 5, on 37th Avenue from 89th to 75th Streets in Jackson Heights. In conjunction with the events of NYC Pride will host the Harlem Pride Day, June 25 at Jackie Robinson Park. Staten Island will celebrate the Pride Fest on July 16 at the historic Snug Harbor Cultural Center & Botanical Garden.

The first NYC Pride March took place in 1970, a year after the Stonewall Riots, regarded as the birth of the modern LGBT movement. In 2019, on the occasion of the 50th anniversary of the riots, New York City will host the World Pride, a series of events in celebration of gay rights that will last for two months in the United States.

NYC & Company is the official agency for the promotion of tourism in New York City. Its prime objectives are to increase the tourist offer in the five boroughs – Brooklyn, The Bronx, Manhattan, Queens and Staten Island, economic development and the diffusion of the image of the city of New York in the world. For information: nycgo.com and twitter @nycgo_it