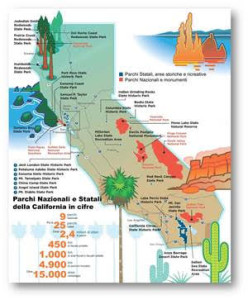 In 2016, the National Park Service is 100 years old (NPS Centennial). A centenary celebrating America’s national parks and inaugurates a new century of promotion and safeguarding of these wonderful places where history, culture and nature meet. therefore important year for the California national parks owns nine. In addition to the most visited Yosemite, famous for its vertiginous waterfalls and towering granite walls, and Death Valley, which, with its sand dunes is the largest US park, the Golden State offers views of nature less known and equally fascinating.

Desert plains populated by smooth rocks from the elements and uniquely shaped trees – from which the park takes its name – distinguish Joshua Tree, a true spectacle at sunset. For lovers of unmissable heights are the majestic redwoods in the Redwood National and State Park and Sequoia and Kings Canyon National Parks.Landascape spectacular meet at Pinnacles National Park in the Central Coast, considered the youngest park in California; here the landscape characterized by deep escarpments and winding caves was designed by intense volcanic activity. Same origin is shared by the Lassen Volcanic Park in northern California where the prevailing hot springs and crystal clear lakes. From the high altitude pass the ocean with unspoiled sea of ​​Channels Island National Park and the peninsula of Point Reys National Seashore overlooking the Pacific Ocean a few steps from San Francisco.

National parks are added more than 25 state parks, historical and recreational areas totaling 2.4 million hectares of nature.
Classified as California State Parks and Historic Parks are among the most diverse. Specifically, Bodie State Historic Park is the best preserved ghost town of WEST. Located north of Mammoth Lakes, the city was inhabited between 1877 and 1888 by about 10,000 people in those years produced $ 35 million in gold and silver. The place owes its name to the prospector William Bodey that they first found deposits of precious materials in 1859.
Rather different atmosphere distinguishes Mono Lake State Natural Reserve. A lunar landscape with saltwater lakes where you stand tufa columns and a unique biosphere in the world where they have found their habitats thousands of migratory birds, ideal for bird watching.

Listed as a historic building in 1963, the park wanted by the American writer Jack London in Glen Allen is instead the highlight of Sonoma County. Within the 32 hectares it is a 19th century wine cellar, a giant sequoia 2,000 years and the cottage where the writer used to devote himself to his narratives, and where he lived until his death.

Another state park in the Bay Area is the Angel Island State Park, the largest island in the bay. Once the center for immigration today Angel Island offers visitors a 360 degree view of San Francisco. A 3 km from the coast of the city is also that Alcatraz, known throughout the world for his past as a maximum security prison, has been appointed as part of the Golden Gate National Recreation Area.

Going further south back to be queen unspoiled nature with the protected reserve of Anza Borrego Desert State Park, a desert expanse with a stunning contrast between the red rocks and the blue sky.